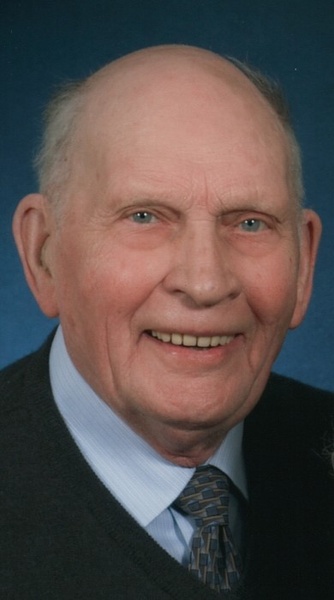 Warren Gladitsch, age 91, of Forest Lake, passed away on October 13, 2019 after a short illness.  He was born on the family farm near Vesta Minnesota in 1928 to Sophia and Martin Gladitsch.  He had many fond memories of life on the farm with his older sister Fern and his younger brother Miles.  Some of his fondest memories were pheasant hunting with his many relatives that lived in the Vesta area.  He was always a farm boy at heart.  He attended the local one room school, arriving by horse each morning (or by sleigh in the wintertime) and later graduated from Echo High School.  After enlisting in the Army in 1947, he was assigned to Ft. Riley Kansas where he served as an MP and played on the basketball team.  Following his discharge, he completed a business degree at St. Cloud State College.  He then held positions at a tile company in Rapid City and the Montgomery Wards distribution center in St. Paul.  He started at Benson Optical in 1958 and worked there for over 25 years.  In 1964, he married Marilyn Facklam from Buffalo, NY whom he had first met at a singles gathering at Central Lutheran Church in downtown Minneapolis (Mom thought he was so dapper!).  They made their home and raised their three boys in St. Paul until retiring to Forest Lake in 2001.  His hobbies included woodworking, making miniature barns and other buildings (first place at the state fair!) and acquiring old tools that reminded him of the farm.  They also had a cabin in the woods on Largon Lake in western Wisconsin, fulfilling a dream he had since he was a young man.  Many years were spent as a family enjoying this wonderful place in the great outdoors.  For years he was a volunteer at the Family Pathways thrift shop in Wyoming, MN where he worked with donated items, built extra sturdy donation drop off boxes and enjoyed the camaraderie of his fellow volunteers.  Dad was a no-nonsense, thrifty kind of guy that always put others before himself and he will be greatly missed.

The last weeks of his life were spent at J. A. Wedum hospice where our family was able to spend cherished moments with him.  He is preceded in death by his parents; and siblings, Fern and Miles.  Survived by wife, Marilyn; sons, David (Debbie), John (Valerie), James (Pam); grandchildren, Daniel (Ruth), Michael (Courtney), Katherine, Annie, Lizzie, Matthew, Kevin, Jack; 3 great grandchildren, other family members and friends.

A Memorial Service will be held at 2:00 p.m., Friday, October 25, 2019 at Hosanna Lutheran Church, 9300 Scandia Trail North, Forest Lake, Minnesota.  The family will greet friends one hour prior to the service at the church.

To order memorial trees or send flowers to the family in memory of Warren Gladitsch, please visit our flower store.