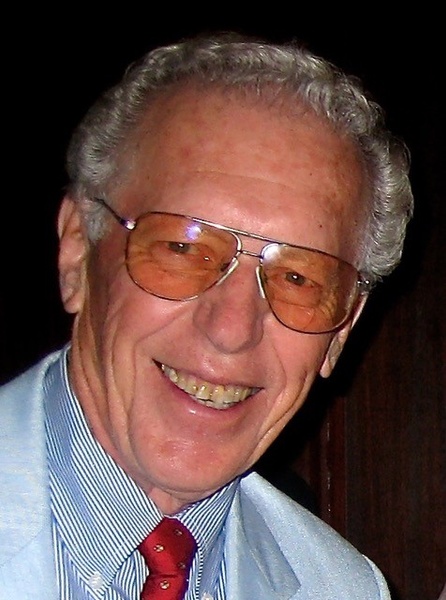 Walter O. Simpson, 95, of Chisago City, Minnesota, died peacefully on Tuesday, November 17, 2020 while surrounded by his loving family.  Wally was born May 1, 1925, in Fairmont, Minnesota, the son of William and Marion (Richardson) Simpson.  He graduated from Fairmont High School, Class of 1943.  Following graduation, he joined the United States Navy where he served our country as a pilot.  He spent the summer of 1946 driving a tourist bus for Glacier National Park.  He was hired as the private driver for Cecil B. DeMille (filmmaker), but most importantly he met his future wife Cecilia “Sally” Jansen while working that summer.  He returned to Minnesota where he enrolled at Macalester College to study journalism.  Wally and Sally were united in marriage in 1950, they were blessed to have celebrated their 70th anniversary this year and are parents of seven devoted children.  Wally started his working career in journalism; first at the Prescott Journal and later became Editor at the Brainerd Daily Dispatch.  In 1960 he started his own company, founding Cold Type Setters in Minneapolis, it was successful and grew to nearly 100 employees before retiring in 1987. The company continued its success and growth under family leadership as CTS and then Periscope. In his free time, Wally enjoyed spending time with friends and family, golfing, fishing, hunting, winters with his bride in Arizona and traveling the world.  He is preceded in death by his parents, William Simpson Jr. and Marion Ruth Richardson, brother Don Simpson; sister Ruth Swanson. He will be deeply missed by those who knew and loved him including his wife, Sally, children, Sandy Totzke, Greg, Dave (Judy), Bill (Carin), Jim (Peg), Cindy (Rick) Siewert, Laurie (Paul) Finnegan, 23 grandchildren, 24 great grandchildren, brother Bob (Angela) Simpson, and many other family and friends.

A children-only private Mass of Christian Burial will be celebrated at The Church of St. Joseph, 490 Bench Street, Taylors Falls.  Interment at St. Mary of the Lake Cemetery, White Bear Lake.  Memorials are preferred to the Alzheimer’s Association.  For those who would like to celebrate Mass with the family, live-streaming will be available. A public memorial service will be planned for 2021, post COVID.

To order memorial trees or send flowers to the family in memory of Walter Simpson, please visit our flower store.