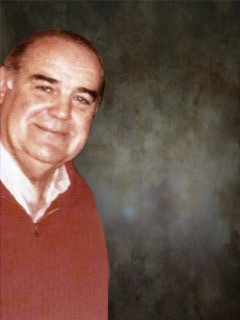 Richard Morrison Donlin was born on June 17, 1934, in Excelsior, Minnesota, to Joe and Stella (Nelson) Donlin.  Dick was raised on a dairy farm and delivered milk by truck, bike, even by sleigh on Lake Minnetonka, and was known to run everywhere, earning him the nickname "Dickie Dasher".  Dick graduated from Excelsior High School and went on to be a three-sport athlete at Hamline University. In 1966, he was the youngest member inducted into the Hamline Hall of Fame. He had a brief try-out with the Baltimore Colts, as their 2nd round draft pick. In June, of 1956, Dick married the love of his life, Janice (Cook) Donlin.  Dick was hired as an Athletic Director, Coach and Teacher at Fridley High School.  Dick was recently inducted into the Fridley High School Hall of Fame for his significant contributions to the Fridley community where he owned and operated a Dairy Queen, was a volunteer Fire Fighter, a member of the Fridley Jaycees, and was the town’s first Park Board Director.  Some of his notable achievements were the Moore Lake Swim Beach and the large sledding hill in Commons Park.  Dick went on to open an insurance agency for Fidelity Life and Accident. After moving to Edina in 1973, Dick worked for Jostens, where he successfully landed the Denver Broncos and Dallas Cowboy’s Super Bowl Championship Ring accounts.  In 1977, Dick found his true calling, starting his own company within the Promotional Products Industry as a Manufacturer’s Representative.  Dick was eventually joined in the industry by his daughter and three sons. Dick had the honor of being named the Multi-Line Rep of the Year in 1994 and received the UMAPP Lifetime Achievement Award.   Combined with his industry knowledge, love of teaching and outgoing personality, Dick was able to enjoy a long and successful career.  After retiring in 2004, Dick and Jan enjoyed spending time with family and friends at their lake home in Balsam Lake, WI. and their winter home in Ft Myers, FL. Dickie could spot a fellow left hander from across the room. He was a quick wit who loved to tease, loved singing around the campfire or on the pontoon boat, and was known for his famous one-liners. Dick will be greatly missed by all who knew and loved him.  Dick was preceded in death by his parents, son-in-law, Vadaain Dixon; siblings, Joe Jr., Pat (Arnon) Reese, Nancy Swearingen; sister-in-law, Terry Sibinski; brothers-in-law, Bob Cook, John Cook; father and mother-in-law, Ernest Cook and Helen Johnson.  Dick is survived by his wife, Jan, children, Cheryl Dixon, Tom (Lee), Jay (Kathy) and Steve (Laura); grandchildren, Piper, Nici (Brandon) Thomas, Jianna, Joey, Ava, Ryan, Tommy, Garrett, Joe, Mitch, and 6 great-grandchildren; brothers-in law, Bill Swearengin, Phil Sibinski, Jim (Lynn) Cook; nieces, nephews, family and friends.

Dick died, Saturday, February 22, 2020 while surrounded by his devoted family. We want to thank the staff at Birchwood Heath Care Center for their loving care and attention given to Richard over the past few years.  There will be a celebration of life at a future time and date. It is our hope that all who knew and loved Dick will join us for one final, final.

To order memorial trees or send flowers to the family in memory of Richard Donlin, please visit our flower store.