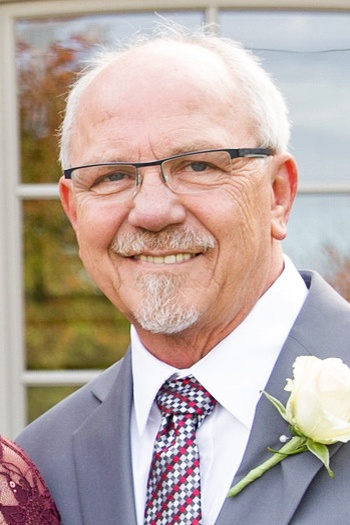 Merlin was born December 9th, 1953 in Ida Grove, Iowa to parents Hugo and Mary Jean Schiernbeck. When Merlin was entering the eighth grade the family, including his older sister Marlene and younger sister Marlys, moved to Lamar, MO. His brother Milo, the oldest, joined the military.

During high school and after graduating, Merlin worked for Heim Chick Hatchery in Lamar. He became the father of two boys, Travis and Steven, with Brenda (Young) Felts. Their farm west of Lamar housed 50,000 chickens. It was also the location of the yearly Christmas light show that Merlin became famous for. His father Hugo would join in, dressed as Santa, to hand out candy canes as the cars drove by.

When his marriage to Brenda ended, he became husband to Linda (Gilmore) and step-father to several children who still remain close to him today; Christie Burch Dunkley, Jodie Burch Boswell and Paul Stebbins.

Life for Merlin changed when a tornado took his chicken barns and left him with a mess. A job offer to manage a million chickens took him, Linda, and their children Dallas, Houston and Dakota to Redfield, South Dakota.

Tragedy struck one cold February morning when a house fire sent Linda and two-year-old Dakota by air ambulance to the Burn Unit in St. Paul, MN. Someone gave Merlin a jacket and he arrived with only the clothes on his back, his cowboy hat and cowboy boots.

It was because Merlin spent a year with Dakota in the hospital learning her treatments that he was hired to work on the Burn Unit as an aide. During this time, one of Dakota’s nurses, Becky (Schadewald) became his wife. Together they had a son, Jordan.

It was Becky who encouraged Merlin to go back to school for his nursing degree. In 1999, he received his ADN and began working as an RN at Bethesda Hospital in St. Paul, MN. Until his retirement, patients and staff enjoyed his sense of humor and calm demeanor.

Merlin and Brenda Kelly married in 2011 and made their home close to lakes and wildlife in Osceola, WI. He became stepfather to Mitchel Ohly and talked football and to Megan (Jake Fellows) and talked “Elf”.

Merlin was fortunate to have time in the last few years to enjoy his love of flowers, his beautiful yard and to expand his Christmas light display. He loved afternoon drives, looking at the cattle and new babies. He loved football. Go Chiefs!

Welcoming him home were his parents, Dakota, and Travis.

Family that loves him:

A private family memorial will be held at a later date.

To order memorial trees or send flowers to the family in memory of Merlin Schiernbeck, please visit our flower store.