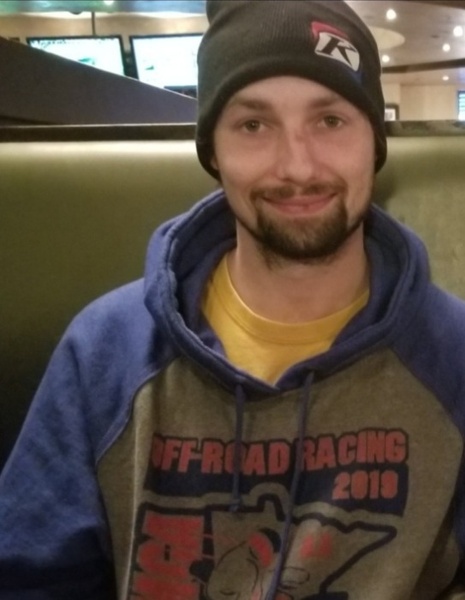 Mathew Ray Lindeberg passed away at the age of 29 on October 1, 2021 in a single vehicle crash just north of Lindstrom, Minnesota.

Matthew was born on October 3, 1991 to Ronald Lindeberg and Angela Butschun. A natural athlete from birth, Matt learned to swim and water ski before the age of 2. He was a very gifted dirt bike rider taking 1st place in his first race at the age of 7. Matt would achieve success winning several state championships throughout his District 23 Enduro and Harescramble career. Matt attended and graduated from Forest Lake High School where he also played hockey and football.

Matt was best known for his big smile and equally large heart. He cherished life and always lived for adventure. His excitement was infectious making those around him eager to join him in his endeavors. Matt also had a way of never letting obstacles stand in his way and always seeing the lighter side of hardship. Those in his inner circle share many inside jokes and stories that will continue to bring smiles and laughter for years to come.

When it came to Matt's personality, he was always just a big kid. His main mission in life was to always have fun. Very few people could rival his child like spirit and sense of wonder. These qualities didn't stop him from always aspiring to be the best at the things he set his mind to. Matt loved to play hard, but also knew the meaning of hard work. In his mid-20's Matt joined the Bricklayer's Union and learned the trade. Taking what he learned he would eventually go on to start his own business, Bald Eagle Tile and Stone.

Matthew is survived by both of his parents, Ronald Lindeberg and Angela Butschun. As well as his older brother, Robert Lindeberg.

East of hwy 65, 17 miles north of Mora, follow the orange arrows, use the plus code address for directions 4Q89+4Q5, Woodland, Minnesota.

(note) The driveway is not accessible to big rigs/RVs.

To order memorial trees or send flowers to the family in memory of Matthew Lindeberg, please visit our flower store.

Services are to be announced