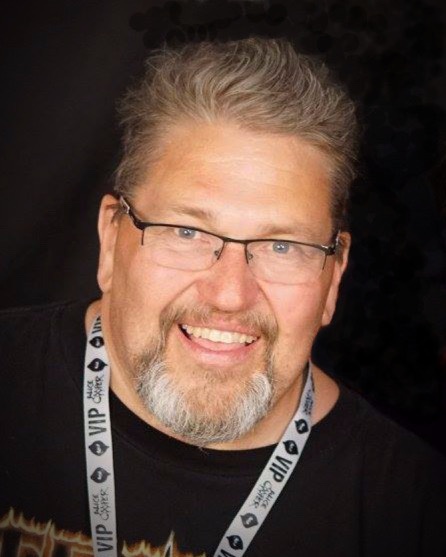 Mark Alan Lebens, 57 of Lent Township, died peacefully in his home November 13, 2018. He left behind his wife of 33 years, Sara, his daughter, Alicia, and his sons, Alex and Andrew. He devoted his life to the service of others, and he was a fiercely loyal and giving friend. He held true to the convictions instilled in his early life by his parents and lived a life of integrity and honor. He never met a dog that didn’t instantly deem him a man of good character.  Mark spent a three-decade career in Law Enforcement with the majority as a patrol officer in the St. Anthony Police Department. He saw some of the worst parts of humanity, but still came to work everyday with a determination to do good in the lives of those he served and those he served with. After he retired, he would continue to watch the television show, “Cops,” and said he found the depiction of traffic stops to be relaxing.  Mark could strike up a conversation with a stranger and within minutes would discover their life story was somehow woven into his, often causing his family to remark that he was either related to or knew everyone in the the state of Minnesota. He was the first to arrive and the last to leave at most gatherings, delighted to sit and chat for hours with a cup of coffee.   Everything in Mark’s life was “fabulous,” a word he used to describe the layout of a luau in Hawaii or the view of Lake Superior on a clear day. Mark loved to travel with his wife, Sara, and had plans for many more trips.  Mark had an eclectic taste in music; he asked for both KISS and Puccini to be played at his funeral. He played the guitar well and the harmonica poorly.  A great supporter of local wildlife conservation efforts, Mark enjoyed spending time in nature at his deer stand every fall. He was an avid gun collector and loved the work of artist Terry Redlin.  Mark thought nothing of driving three hours out of the way to help a friend in need. His family was the most important part of his life and he gladly spent his time and talents caring for them. He never missed an opportunity to boast about his children. We were all better for knowing him.  Mark was preceded in death by parents, Theodore and Marilyn Lebens, and sister Teresa Krippner. He is survived by siblings; Ted (Cathy) Lebens, Tom (Arlene) Lebens, Dave Krippner, Maggie Lebens Friend, Matt (Melanie) Lebens, Michelle (Keith) Eller and Jean (Bryan) Skogsberg; many aunts and uncles, cousins, nieces and nephews, and many, many dearly loved friends.

Memorial Services will be held at 2:00 p.m., Saturday, November 17, 2018 at Marantha Assembly of God, 24799 Forest Blvd North, Forest Lake.  The family will greet friends from 4:00-8:00 p.m., Friday at Mattson Funeral Home, 343 North Shore Drive, Forest Lake and one hour prior to the service at the church.  Private Family Interment at Roselawn Cemetery, Roseville, Minnesota.

To order memorial trees or send flowers to the family in memory of Mark Lebens, please visit our flower store.