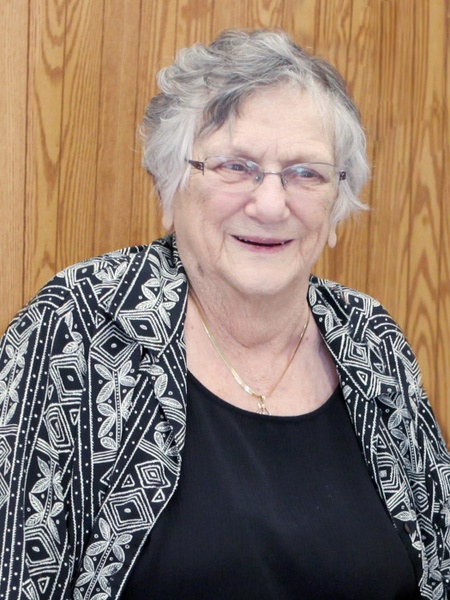 Marianne Miller, age 90, of Stacy, died at home surrounded by family on Wednesday, October 30, 2019.  Marianne was born to Mary Ann and Harold Holte and attended catholic schools in St. Paul.  On January 8, 1949 she married Jerry and started their family.  In 1951 they moved to main street Stacy.  In 1963 they moved to their current home north of town.

While raising 6 kids,  Marianne worked outside the home in the secretarial field and retired from her position as a medical transcriptionist around 1991 from Chisago Lakes Hospital.  She was always busy. One of her jobs was baking pies at home for the Rustic Inn.   She was a fantastic cook.   She had to be as Jerry was VERY picky. She learned many of her homemaking skills from Grandma Miller.

Her friendship was something people treasured. She would always ask how things were going in your life, and most importantly, she would listen, really listen, to you. She cheered you on for your accomplishments, relieved you of burdens when things were tough, and always remembered your stories. From 500 card games, to townhall dances and vacations with friends she loved to have fun with people around her.

She was a wonderful Mother. Patient and kind. Thoughtful and caring. A great teacher to others sharing recipes, her canning, and her needlework including many quilts that she had made over the years for her children and grandchildren.

Marianne loved watching sports especially her children and grandchildren and greats. She was an honorary member of many teams she supported which often became her extended families. Many people in the stands often referred to her as Grandma or Grandma Great.

All that knew Marianne were blessed to have her in their lives.  Even though we miss her, our Angel was itching to join the party in Heaven.

To order memorial trees or send flowers to the family in memory of Marianne Miller, please visit our flower store.