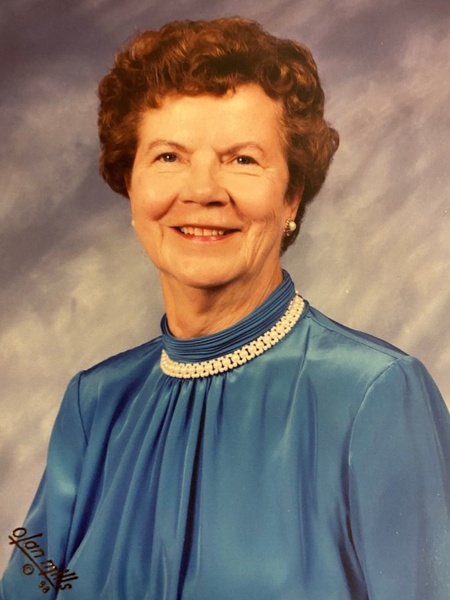 The year was 1925. Calvin Coolidge was president. Life expectancy was 54 years. Gas was 12 cents a gallon; bread was nine cents a loaf. On December 15th, in their grandparents‘ farm house 1.25 miles north of Scandia, twin daughters (Lois and Alice) were born to Albert and Ida Nelson, and that was Lois’s beginning.

The twins were baptized at Elim Lutheran on 1/17/1926 by Pastor Christian Swenson and confirmed on 5/7/1939 by Pastor Joel Olsenius. They attended Goose Lake Grade School, and then Osceola High School, along with their older sister, Dorothy. After graduating from Minneapolis Business College, Lois worked for a number of years in both Minneapolis and Chicago, and enjoyed traveling out West with her twin sister, Alice.

In 1953, she married John McNamara, and they moved to New York State. They had three daughters; Janet, Marilyn, and Donna. Lois lived in New York for 24 years, and for 11 years worked as a medical transcriptionist at the Mental Health Clinic in Owego, New York.

Lois moved back to Minnesota in 1979, when her parents needed help. She worked in Minneapolis at the Park Nicollet Medical Center for 15 years, again doing medical transcription; she retired in 1995. She then moved to Mesa, AZ, where she bought a condo in Sunland Village East and enjoyed an active retirement life. She especially enjoyed square dancing. She met a fellow square dancer, Kenneth Anderson, and they were married in 1999. Lois and Ken loved to travel and enjoyed trips to Hawaii, Australia, New Zealand, China, Israel and Egypt, including a cruise on the Nile River.

Lois was active in the Presbyterian Church wherever she lived: in Owego, New York as a Sunday school teacher; in Minneapolis as a deacon; and in Mesa, AZ as a member of the Chancel Guild.

Her last eight years were spent in an Assisted Living Facility in Orlando, FL, near her daughter Donna, who gave her special care; Janet and Marilyn came to visit often. During the last 5 weeks of her life, her daughter Janet, a geriatric nurse practitioner, self-quarantined with Lois in her apartment due to Covid-19. She provided excellent, compassionate care. Janet was beside her, as Lois peacefully left for heaven on May 20, 2020.

In lieu of flowers, the family requests memorials be given to Lois’s favorite charities: World Vision or Alzheimer’s Association.

To order memorial trees or send flowers to the family in memory of Lois Anderson, please visit our flower store.