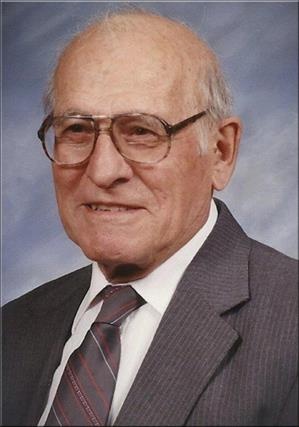 Leonard Frank Blaeser was born on September 30, 1917 in his family's home in South St. Paul, MN. His parents grew vegetables which they would bring up to the Farmer's market in St. Paul with a horse drawn wagon. He grew up during the depression and while they may not have had a lot of things, growing vegetables, and having farm animals, they always had something to eat. He would talk about working in the garden planting, weeding and picking the vegetables and then as he got older he would help his father bring the vegetables to market. When he was in his teens, his oldest brother Joe was asked by a foreman at Armour and Company Meat packing plant if he had any more brothers at home. Len's brothers Joe, Matt and John were already working at Armour's and were known for being hard workers. Joe told the foreman that he had one more brother at home and the foreman said that as soon as he was 18 years old to bring him down to the plant, so Len started working at Armour's when he was 18. He worked there all of his life except for the time that he was in the military. He was one of the last workers out of the plant when it was shut down in April of 1979. Like most men of his generation he saw military duty during WWII. He served in the Army Air Force from August of 1943 until November of 1945. He was a meat cutter for the military. He was slated to go overseas on two occasions, but both times he was pulled back just before he was to ship out. It seems the military always had a shortage of meat cutters. He was stationed several places during those years. He spent time in Oklahoma, Denver and Monterey CA. In Denver and Monterey he would work from very early in the morning until just around lunch time. He then worked off base cutting meat in Denver and canning fish at the Cannery in Monterey. He said he sent most all of his military pay home to his parents, but he got to keep what he made working off the base and what he made playing cards. In Monterey they had a couple of German prisoners of war helping them prepare food for the troops. One was a young soldier who had been one of Hitler's youth. The other was an older soldier with a family back in Germany who confided to Len how worried he was about his wife and children. He did not know where they were or if they were even alive. He told Len that once the war ended, he was going to try and find his family in Germany and if possible, to immigrate to the United States. Len always wondered if he made it. While on leave from the military Len came home to South St. Paul to be with his family. While visiting his brother John and family, he met the upstairs tenant of the duplex John was living in, her name was Cleo Maurer. He would say that he knew right away that she was the one for him and soon after his discharge from the military they were married on his birthday, September 30, 1946. They built a home on land they purchased from Len's parents just down the hill from the house where Len was born. There were a number of family members living nearby and he enjoyed having family close. While living in South St. Paul, the family expanded to include children Greg, Cindy and Sue. There was always something going on in the neighborhood and the family was there to help each other. Len and Cleo lived there until the Lafayette freeway came through the neighborhood and asked them to move in 1971. In 1955 Len's friend Maury went up north for a weekend of fishing and came back to tell Len about the cabins that he had found up on Big Pine Lake near Finlayson and shortly after that Len and Cleo purchased one of the cabins and Maury and Helen purchased the other. Summers were spent at the lake fishing, swimming, playing cards, croquet and badminton. Len and Maury always had some project to work on improving the cabins, docks, swimming area and the like. There were many happy times enjoying the cabin and the lake. In 1971 Len and Cleo relocated to Forest Lake and built a home in the woods. Len loved to be outside and kept a garden. And when he wasn't at the lake he always had some project going on. He did not slow down much after retiring. His health stayed with him and at age 85 he was up on the roof at his daughter's house helping put on new shingles. He was also happy to see grandchildren come along. You could tell by the smile on his face that he enjoyed every minute that he got to spend with them. He would make things for them to play with from old lumber in the garage. Len was a great husband and father. When Cleo was sick near the end, he took care of her at home with help from the hospice team. He missed her greatly after she passed away. As a father Len was always there for his children, giving them whatever help they needed. He was a patient man as proven by the time he spent in the fishing boat when Cleo wanted to stay out "for just a little while longer".

He enjoyed playing his accordion, and he was quite a cribbage player. In later years he would take a nap every day after lunch with his cat Kitzle curled up by his feet.

He always said that he wanted to live to be 100. He almost made it. It is amazing to think about all of the change that he saw in his lifetime. From horse and wagon, to man on the moon. Through it all he remained true to his beliefs, unwavering in his faith and he always kept things simple. He will be missed by his children Greg and his wife Rita, Cindy, and Sue and her husband Paul, Grandchildren Jessi and her husband Joshua, Katie and her husband Jason and Emily, and great grandchildren Matthew, Annika and Will. Visitation will be held from 6:00-8:00 p.m., . on Wednesday, May 17, 2017 at Mattson Funeral Home, 343 N. Shore Drive, Forest Lake with a prayer service at 8:00 p.m. Visitation will continue one hour prior to Mass at the church. Mass of Christian Burial will be celebrated at 11:00 a.m., Thursday, May 18, 2017 at the Church of St. Peter, 1250 South Shore Drive, Forest Lake. Interment at Fort Snelling National Cemetery.

To order memorial trees or send flowers to the family in memory of Leonard Blaeser, please visit our flower store.