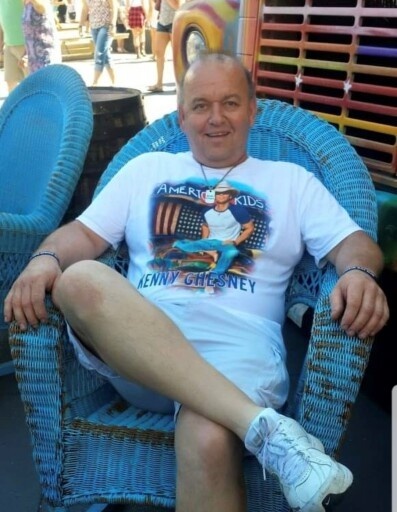 Kyle Steven Koch, 56, of Wyoming, MN passed away peacefully and surrounded by his family on April 9, 2021, after a brief battle with cancer.

He was born July 9, 1964 to Pius & Jeanette (Weekes) Koch in Bismarck, ND. He attended elementary school in Flasher, ND and graduated high school in 1982 from Carrington High School in Carrington, ND. He attended Bismarck Junior College, studying automotive technology and began his career at Sheldon Joppru Toyota in Bismarck. He married Holly Wolff in 1984 and they moved to the Twin Cities in 1988, when Kyle became a technician with Maplewood Toyota, where he worked until the time of his death.

Kyle was a devoted, loving father to his two children and raising his kids was his ultimate pride and priority of life. His son Rory was born in 1987 and his daughter Chelsey was born in 1991. Kyle was so excited to welcome his first grandson Elliot to the family in 2019 and was thrilled to learn a second grandchild is expected in September 2021.

Kyle had a beautiful relationship with Jesus and was always guided by his Catholic faith. He was honored to serve as an usher at St. Peter Catholic Church in Forest Lake, MN. He was known for the many ways he could connect with people and offer generosity to his family, neighbors, friends and strangers.

Kyle was passionate about his hobbies: dirt-track racing, golfing, Elvis music and attending concerts - especially Garth Brooks and Kenny Chesney. He always cheered for the Denver Broncos and his favorite quarterback, John Elway.

During Kyle’s 33 year career with Toyota, he received the national Quality Champion Award eight times, most recently just three weeks ago. In 2010, he was honored to be inducted into the prestigious International Customer Service Champions Society. He attended the ceremony in Japan with Chelsey, where just one person in the world was named in his category.

From the very beginning of Kyle’s brief cancer journey, he reminded us all that “GOD’S GOT THIS.” And for now and into eternity…God’s got him.

In lieu of flowers, please consider making a donation to your local church or community charity in honor of Kyle’s legacy.

For those of you who are unable to attend, live streaming will be available at the Church of St. Joseph's YouTube page.

To order memorial trees or send flowers to the family in memory of Kyle Koch, please visit our flower store.