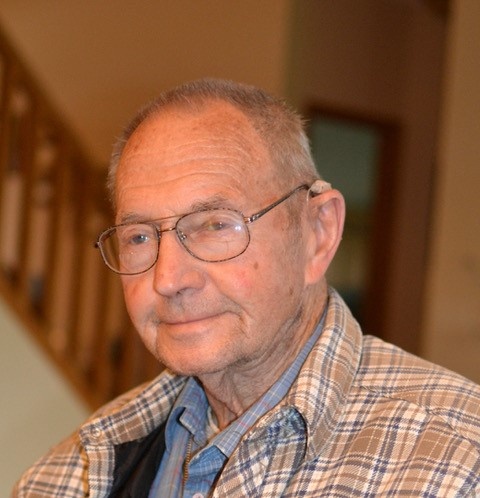 Joseph Eugene Dolphy, age 90, died at the Meadows Assisted Living in Wyoming, MN where he was honorary chaplain for the past 5 years. He greeted new residents, led weekly rosary sessions, made sure Catholics received communion and sat with many people in the transitional care unit, assisted living and memory care as they recovered and transitioned out of this world.

Joe was born in Blaine, Minnesota and grew up on a farm in southern Anoka County.  In 1950 he married Beverly Bucher and they moved to Mounds View where they began raising their family.  He was a mechanic for many years owning auto repair shops, a used car lot, designed and built tow truck accessories, pickup and camper accessories. He also built and raced cars from the early 1950’s through 1969.  He was a track favorite at Twin Cities Speedway in Blaine, MN.

In 1965 Joe and Bev moved their family to a hobby farm on Typo Lake in Linwood Township in northern Anoka County.  After Bev’s death in 1988, Joe sold his home and began spending winters in Yuma, AZ where he enjoyed square dancing and met Kathy Larson whom he married in 1992.  After their marriage, Joe and Kathy enjoyed traveling.  They spent winters in Yuma, summers at his cabin near Talmoon, MN and spring and fall with Kathy’s family in Richland, WA.  While in Richland Joe volunteered at Kadlec Medical Center in the surgery waiting area.  He received an award for volunteering over 4,000 hours.

There are several longtime family traditions.  Joe and Bev started the Dolphy Family Booya in 1967 inviting about 50 people.  This tradition continues and has expanded to include multiple generations of our family and friends.  For several years there were over 200 people in attendance.  COVID reduced the attendees, but Joe was determined to help “at least peel the potatoes” one last time in preparation for the Booya in 2021.  He was happy to be there helping with the prep on Saturday and enjoying a couple more bowls of Booya on Sunday.

Another tradition is Dolphy Family Camp.  It started as a celebration of Joe and Bev’s 25th wedding anniversary.  They wanted all their children and grandchildren to camp with them.  This annual event continues with many family members of four, and one year, five generations attending.  Joe enjoyed hunting and fishing especially with family.

In his 40’s he completed his GED and Associates degree in Chemical Dependency Counseling.  He used his counseling skills with recovering alcoholics and those in nursing facilities in the Forest Lake area, Yuma, Arizona and Richland, WA.

The family thanks the staff at Meadows on Fairview and Accent Hospice for the care and kindness to Joe in the past few months.

Mass of Christian Burial will be celebrated at 11:00 a.m., Friday, December 3, 2021 at the Church of Saint Peter, 1250 South Shore Drive, Forest Lake, Minnesota.  Visitation will be held from 4:00 -7:00 p.m., Thursday at Mattson Funeral Home, 343 North Shore Drive, Forest Lake with a rosary at 7:00 p.m.  Visitation will continue Friday at the church one hour prior to mass.  For those unable to attend, mass will be live streamed at https://youtu.be/buUOiWob5Sk Due to health concerns, masks are requested to be worn by all in attendance.  Interment will be held at St. Joseph Catholic Cemetery, North Branch, Minnesota.  In lieu of flowers please donate in Joe’s memory to your favorite charity.

To order memorial trees or send flowers to the family in memory of Joseph Dolphy, please visit our flower store.