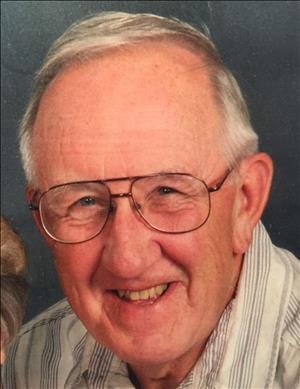 John Elroy Harrington (78) of Forest Lake, MN passed away on August 11, 2017 after a valiant struggle with cancer. He is survived by loving wife of 57 years Marilyn; two daughters Joan (Pete) TerMaat of North Oakes, and Carol Joy (Craig) Paschke of Golden Valley; five grandchildren Morgan, Ben, Mary, Max, and Tara; and numerous nieces, nephews, and friends. John is preceded in death by his parents, George and Hedwig; and siblings George Harrington (Pat) and Gloria Klein (Bob).

Born October 11, 1938 in New York City. After his mother's death, his father raised John (known to his East Coast family as Roy) and his two older siblings in Queens, NY. He joined the U.S. Air Force at age 17 and became a radar operator. Stationed in Wadena, MN, he met Marilyn and they were married on April 30, 1960.

The two settled in St. Paul where John graduated from the Carlson School of Management at the U of MN. Later they lived in Edina, MN where they raised their two daughters while John had a successful career as a Certified Public Accountant. His title of audit partner and chief financial officer fit well with John's "take charge" personality. John passed on his business knowledge through teaching accounting courses at several Twin Cities colleges for many years, as well as volunteering at every church he was a member of during his lifetime.

John and Marilyn owned a cabin on Clear Lake, near Forest Lake, for nearly 20 years. There they relished almost all of their weekends during the summer where John excelled at entertaining guests with his grilling and waterskiing skills. He enjoyed many trips back to New York City and vacations exploring every corner of the U.S., Caribbean, Mexico, and Canada with his "three girls."

Retiring to a lakeside home in Forest Lake and spending many winters in Florida, John continued his lifelong love of boating and fishing into his final days. John was a man of strong faith and those that knew him will remember him for his generosity, humor, accent, and lively New York City wit.

A visitation for John will be held from 6p.m. to 8p.m. at Mattson Funeral Home in Forest Lake on Wednesday, August 16, 2017. Funeral services at 11a.m. at Elim Evangelical Lutheran Church, 20971 Olinda Trail North, Scandia on Thursday, August 17 with luncheon for follow. Burial will be at Roselawn Cemetery, 803 West Larpentuer Avenue in Roseville directly following the luncheon. John wished for memorials to go to Elim Evangelical Lutheran Church or to the donor's choice.

To order memorial trees or send flowers to the family in memory of John Harrington, please visit our flower store.