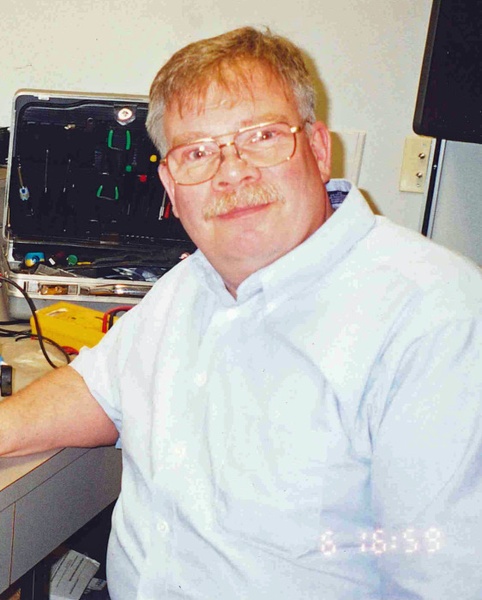 Harold “Hal” James Schardin of Columbus, Minnesota, passed into Heaven on Tuesday, June 18, 2019 at Region's Hospital.  Hal Schardin was born October 3, 1950 in Minneapolis, Minnesota to Harold and Emelia Schardin.  Hal was their only son and his dad passed away after a long fight with lung cancer when Hal was 12.

Ever since Hal was a child, he had an interest in Electricity, how things work, taking things apart as his mom would say, give him a box of wires, batteries and tools and he would be happy! He often would take apart his family telephone only to have mom have to call phone company to put it back together...once, after that, Hal put the phone back together himself. Hal thought that Inside an electrical socket was the Kilowatt guy who would come out and play...SURPRISE!

Hal spent a short stint as disk jockey at KANO K TWIN.  His dream job came to him in 1972 or 3?, WCCO Radio, the GOOD NEIGHBOR...Hal was engineer there, the guy behind the glass for 25 years.  He later worked as engineer for KSTP and then for Minnesota State Services for the Blind. He "Retired" 4 years ago only to jump into many projects at home and church.

One late night in 1975, Hal met his soon to be wife Patty at the Hoffbrau bar in Blaine, MN when he asked Patty to dance.  It wasn't love at first sight as Patty was heading off to basic training with the Army Reserve.

In the fall of 1975, Patty returned from Basic and called Hal, feeling guilty that Hal would have felt "used" for his skill in putting 8 track player in her car before she left for service...well the rest is history....Patty Guisinger married Hal Schardin December 3rd, 1977 at Resurrection Lutheran Church in Blaine, Minnesota. When Hal and Patty married, they moved into a house with five acres in what was then Columbus Township.  Hal noticed that Forest Lake had a small radio station WLKX owned by Ed and Joanne Cary.  Hal introduced himself and volunteered time helping then with their sound and transmitter sights.

Growing up, Hal never had pets other than a dime store turtle he lost in a cold air return :( so right away in their marriage they had PETS...first dog; Sparky, Then Pepper, Puppy, Inga, Olive and finally Aubree.

One of the family's favorite past times was finding local parks and trails, ethnic grocery stores and restaurants, actually, any adventure with his sons. Hal always had a soft spot for their sons’ friends, for nephews and nieces all of which stayed and sometimes traveled with the Schardin family.

Hal and Patty were married 41 years this past December of 2018.  Over the past year, family noticed Hal slowing down, less able to walk the trails.  Hal seemed more and more out of breath.  Finally, this past May 31st through June 8th, while on family vacation at Black Pine Beach resort in Cross Lake, Hal showed signs of being critically ill.  On Tuesday June 11th, Hal was taken by Patty to Region's Hospital emergency room and was then hospitalized where family discovered Hal's Liver and kidneys were no longer functioning.  After a biopsy, it was discovered Hal was suffering from pancreatic cancer.  On Tuesday morning, June 18th, 2019, Hal Schardin entered the presence of his savior, Jesus Christ.

Hal will be greatly missed here on earth by his wife, sons and so many friends.  He was a great man, with a dry humor, generous heart and tons of patience.... He was always giving, always serving and just an all-around Good Guy!

Hal served in his church at Crossroads as the "sound guy" for Many years....even up to two weeks before he passed.

Services for Hal will be Monday July 1st with visitation from 4 to 6 PM with service at 6 at Crossroads Covenant Church, 17445 Notre Dame Street, Columbus, MN.  Memorials to Pavek Museum preferred.  Interment at Resurrection Cemetery, Mendota Heights, MN at a later date.

To order memorial trees or send flowers to the family in memory of Harold "Hal" Schardin, please visit our flower store.