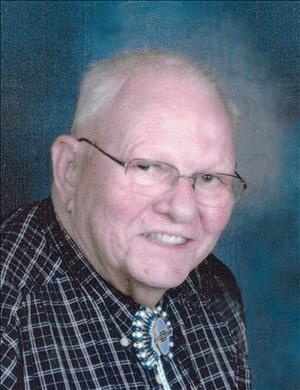 Donald Alfred Frenning was born on June 2, 1928 in Stacy, Minnesota to Olaf and Agnes (Waller) Frenning. He spent his childhood years on a farm in Linwood Township in Anoka County. He went through school and confirmation with cousin and pal Harry Waller. They graduated in the Forest Lake High class of 1946. A U.S. Army Veteran of the Korean War, Don earned 2 bronze service stars, an Army Occupation Medal Japan, and a United Nations Service Medal. He joined the International Union of Operating Engineers. He was employed by the city of St. Paul. Don married Dorothy Lee in 1960, and for their 25th Anniversary they traveled to Japan and visited the site of his military service. Living near family became a reality when they built a new home at "Creeky Point" in rural Stacy. Don retired from St. Paul Public Works with his pension and his books, and he later sold their Stacy home to travel with his fun-loving, roller skating, musical spoons playing wife, Dottie. They "R-Veed" across the continental USA for 17 years, living for the longest stretch in Pharr, Texas. Reading was Don's life-long passion, and anyone that knew him also saw his affinity for vehicles old and new. For many years he also collected stamps, but talking cars was his bliss. Not everyone knew how keenly Don researched genealogy and added records of several generations to the branches of his family tree. He was proud of the new generations. He was honored by his ancestry. Don's earliest known namesake Alfred de Valer (later Anglicized as Waller) dates to the year 1010 A.D. Alfred's son Alured is recorded in history as "The Hero of Hastings" of 1066. This knight was the reason the Waller family became landowners in England and perhaps is why this extensive lineage is recorded. Another ancestor provided the "Fade flowers fade" quote, poetically accepting of the natural order of living. Edmund Waller's poems from the 17th Century remain in print and are studied to this day. The old Stacy church (shown on the front of Don's funeral program) was founded by Don's own Waller and Frenning grandparents. The 115 year old congregation is still intact today as St. John's Lutheran Church, with Don having made significant contributions over the decades. It was always "Home" to him. He seemed to have a relationship with his church much the same as he related to his family, with generosity, gratefulness, humility, patience, and a sense of humor. Don passed away on September 1, 2017, after arriving by ambulance at Regions Hospital, St. Paul. He had delighted in visits from family that week. His death was sudden and so quick that the ER doctor reported "Don has made the decisions for us." He died at 11:01pm, at 89 years of age. Donny's sister Helen went to Dorothy the next morning and conveyed the sad news of his death. The whole family appreciates the sympathy showed to Dottie by St. John's church members and the Ecumen Parmly community where Don and Dottie have lived since 2005. Also valued, the additional show of love to Dottie by Parmly staff and residents in Isabelle's House, their home since January 2016. Don was preceded in death by parents, Olaf & Agnes (Waller) Frenning; siblings, Lawrence (Carolyn "Sis") Frenning, Margaret (Rodney) Nelson (Vern) Holmgren, Edna (John) Freed, Eleanor (Rodney) Shogren; Bob (Norma) Frenning; brother-in-law, Floyd H. Bellin, Jr., and many cousins. Survived by his beloved wife of 57 years, Dorothy "Dottie" (Lee); loving sister, Helen Agnes Bellin; and Don's "Georgia Peach" sister-in-law, Kathy Affolter, cousin Harry Waller, and several more. Donny was also uncle extraordinaire to 26 nieces and nephews that he and Dottie claimed as their kids, two that preceded their uncle in death, niece Nancy and nephew John. Survived by nephews and nieces: Kevin, Lynell, Roger (Libby), Lois, Brenda, Barbara (Terry), Dennis (Karen), Jerry (Berdy), David (Kathy), Carol, Laurel (Dennis), Susie (Bob), Rick (Julie), Doug (Kelly), Joy, Diane (Ron), Gary (Wendy), Bruce, Joan (Rick), Sandy (Duane), Cheryl (Jim), LeAnn, Curt (Robin), Brad (Mary) and Valerie. He leaves behind a boisterous and loving family that will truly miss him. Rest with our love and in peace Husband, Brother, Uncle Don. Funeral Service 2:00 p.m., Sunday, September 10, 2017 at St. John's Lutheran Church, 31075 Genesis Ave., Stacy. Visitation one hour prior to the service. Private interment at Stacy Cemetery. In lieu of flowers, Don would want you to give to your favorite charity.

To order memorial trees or send flowers to the family in memory of Donald Frenning, please visit our flower store.