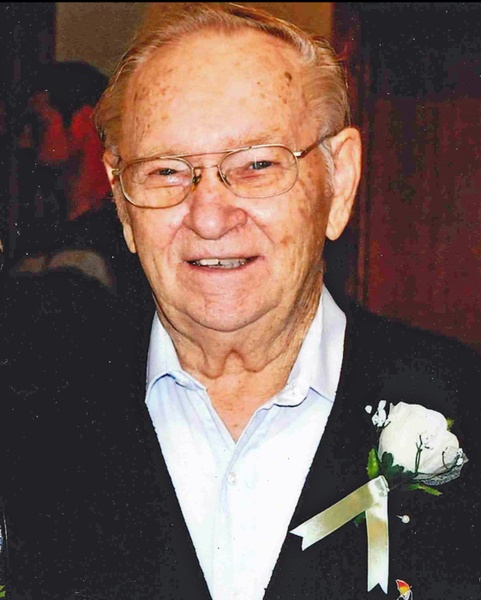 Clarence Joseph Lauer, of Forest Lake, Minnesota, died peacefully in his sleep on October 7, 2019, at the age of 97, in his daughters’ home in Kettle River, Minnesota.

Clare was born January 15, 1922, in Cambridge, Minnesota, to Albert and Amy Lauer.  He lived in several places in his early growing up years.

By school age he lived in Webster, Wisconsin, where he attended a country school and graduated from Webster High School.  He attended Bethel College in St. Paul and the agriculture campus of the University of Minnesota.

On October 8, 1949, Clare married Mary Carlson, at the Lutheran Church in Marine on St. Croix, Minnesota.  He moved his family to Grand Rapids, Minnesota, where he worked at National T. Grocery and helped start the Baptist church.  In 1960, he moved his family back to the cities where he worked as a quality control supervisor for Buckbee, in St. Paul.

Clare was an avid gardener.  He spent 25 years after retirement leading weekly nature hikes in William O’Brien State Park and cataloged the wild flowers at the park.  He also took up the hobby of picture framing.  He was always involved in his church wherever they lived, leading youth groups, teaching Sunday School, assisting with Awana, and leading Bible Studies.  He and Mary liked to take trips with their grandchildren to visit friends.  Clarence planned annual family camping trips to state parks.

A very special thanks to St. Croix Hospice for their loving care and support.

Celebration of his life 11 AM, Monday, October 14, 2019 at Immanuel Church of Forest Lake, 9511 W. Broadway. Family will greet friends one hour prior to service.  Interment at Stanchfield Baptist Cemetery, Stanchfield, MN.   In lieu of flowers memorials preferred to the church.

In lieu of flowers memorials preferred to the church.

To order memorial trees or send flowers to the family in memory of Clarence Lauer, please visit our flower store.