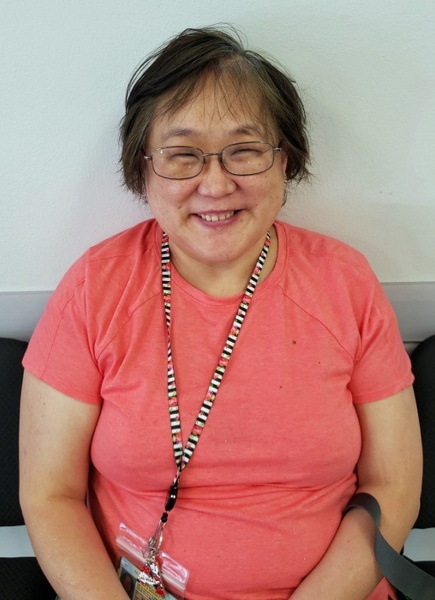 Amy Elizabeth Hei-Sun Klemm age 42 died peacefully Aug 4th, 2020.  Born March 5, 1978 in Seoul, Korea. She was cared for in an orphanage, and later a foster home where she attended Seoul Rehab Institute. She was then adopted into her forever family, of parents Jerry and Judy, as well as brothers Villery and Troy where she received her nickname “Miss Muppet”.

Amy was baptized December 11, 1983, and later confirmed May 01, 1994 at St. Stephen Lutheran Church in Marshall, MN. In 1997, she graduated from Marshall Public High School.  She later moved with her parents to the “cabin” on Clear Lake.  Her next step into adult independence, was a group home in Woodbury, MN with New Directions. She would later move into an apartment with a former housemate. At this time, she became an active member of King of Kings Lutheran Church. Her final home would be the “Glenpaul Resort”, under the direction of Wingspan. While living there she joined Roseville Lutheran Church.

No matter where she lived, Amy enjoyed participation in Special Olympics (S.O.). She loved to bowl and continually compared her scores against her Dad’s. She dreamed of being a Pastor like her Grandpa Alton and spread Gods love to all those she met. Another aspiration of Amy’s was to be a nurse or healthcare provider like the many strong women in her life.

Amy will always be remembered for her stories, jokes, and humorous banter especially with her uncles.

She loved to sing whether alone or with a group including the various church Praise teams, the Wingspan Glee club, and she even sang a few solos at various banquets.  Smiles and laughter would always follow her around no matter if it was fishing or playing games with her nieces and nephews at the lake. Amy was a frequent blood donor thru the American Red Cross as well as an avid fundraiser for S.O., frequently participating in the Polar Bear Plunge, despite the cold. Using her trusted telephone, she kept in touch with many people, noting birthdays, anniversaries, new babies, or other special events, and gladly shared the news with the rest of us. She was a wiz at cribbage, and gin rummy, always ready to play another game, and she strived to beat anyone who dared to play.

The meaning of Amy’s Korean name Hei-Sun (grace and goodness), became a standing phrase started by Grandma Toodie and Amy, and then adopted by all of us, whenever a situation would arise one or more could say, “Goodness gracious Amy Klemm”.

To order memorial trees or send flowers to the family in memory of Amy Hei-Sun Klemm, please visit our flower store.