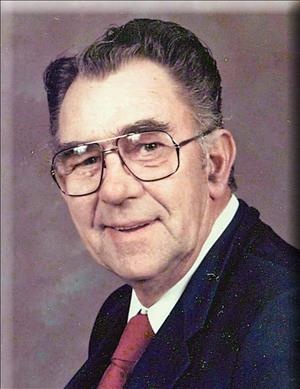 Albert "Bud" Nathan Dahlberg, loving husband, father, grandfather, and great grandfather, age 92 of Grantsburg, Wisconsin passed away peacefully in his sleep on August 7 in his residence at the Parmly facility in Chisago City, Minnesota.

He was born in Grantsburg on March 9, 1925, the first child of Frank and Edna Dahlberg and was named after his maternal grandfather Albert Larson, but was known all his life as "Bud". Bud graduated from Grantsburg High School, registered for the selective service in 1943 and joined the Army soon after, serving in Korea and earning the rank of Staff Sargent. He was an admirable example of patriotism, steadfastly and passionately defending the values of our country.

His entire career was spent at Northwestern Wisconsin Electric Company where he served many roles from line construction foreman to fabrication and installation of equipment. He was particularly proud of the spotless lifetime safety record for himself and his crew on the powerlines.

In his adult life fishing and hunting were his passions. He landed hundreds of muskies over his lifetime on lures he constructed himself, and his dedication to every detail when it came to accuracy with his rifles and bows was extraordinary. As a youth he was a gifted and talented member of Grantsburg's baseball, basketball, and football teams, plus was an avid ski jumper. In the early 1960's he formed, and served as President of the Grantsburg Ski Club spearheading the building of a 30 meter ski jump in Grantsburg for local youth.

He was preceded in death by his parents, wife Dorothy in 2014 to whom he was married for sixty seven years and by one grandson Aaron Dahlberg and half sibling Kae Christenson.

The Funeral Service to celebrate Bud's wonderful life will be conducted on Saturday August 26 at 11:00 AM with visitation beginning at 10:00 AM at Faith Lutheran Church, 421 S. Russell Street, Grantsburg, WI.

To order memorial trees or send flowers to the family in memory of Albert Dahlberg, please visit our flower store.