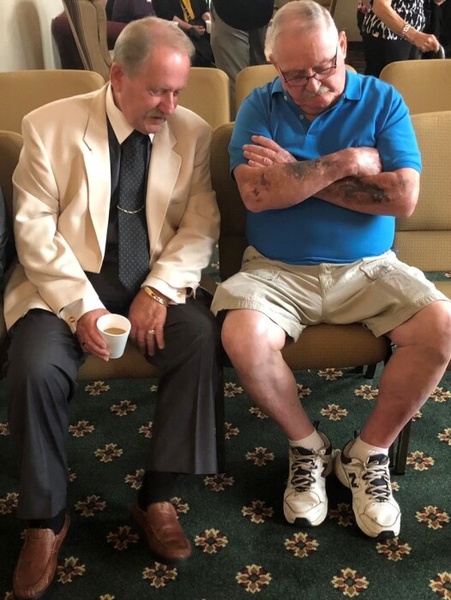 With heavy hearts we announce that on Sunday August 30th, 2021 that Richard (Dick) Arnold Smith, son to Ida and Hillard Smith, was called upon by God to join him in the afterlife along with his best friend Lowell Brehm who has sadly also left us the previous Thursday. Richard was a proud Veteran of the United States Navy, serving from 1962 to 1968 with an honorable discharge. After his service he returned to East Saint Paul and would later meet his wife of 46 years Rochelle Joan Smith (Paul) and shared three children, Cheyne, Jezette, Brandon Smith. He was in the used car business for a time with a lot in St. Paul, but he would go on to become a trucker in Minnesota for over 50 years with his impeccable safety record, something he took great pride in. Later his oldest son Cheyne Smith joined him in the business as a co-operator and would work side by side and they were affectionately called "Big Dick and Little Dick.” Richard lived a full life as a whisky sommelier and part time mechanic who knew cars and trucks from front to back and would wheel and deal vehicles he found and fixed up. He certainly walked to the beat of his own drum as it was the only way he knew. He is preceded in death by Ida and Hillard Smith, Esther Anderson. He is survived by his wife Rochelle Smith, six half siblings, three children, Cheyne Smith and his wife April Smith, Jezette Lean (Smith) and Zach Leen, and Brandon Smith; Grandchildren, Olivia and Addison Smith, Cassie, Lexie, Mason, and Briella Leen, Riley Wilson, Blake and Payton Buckley.

We ask you to join us at the White Bear Lake American Legion Post 168, 2210 3rd Street, White Bear Lake, Minnesota, for a Celebration of Life from 1pm to 4pm Saturday September 4th, 2021. We ask for donations to help with expenses if possible. We will be holding a private ceremony at Fort Snelling on a later date to be determined.

To order memorial trees or send flowers to the family in memory of Richard Smith, please visit our flower store.